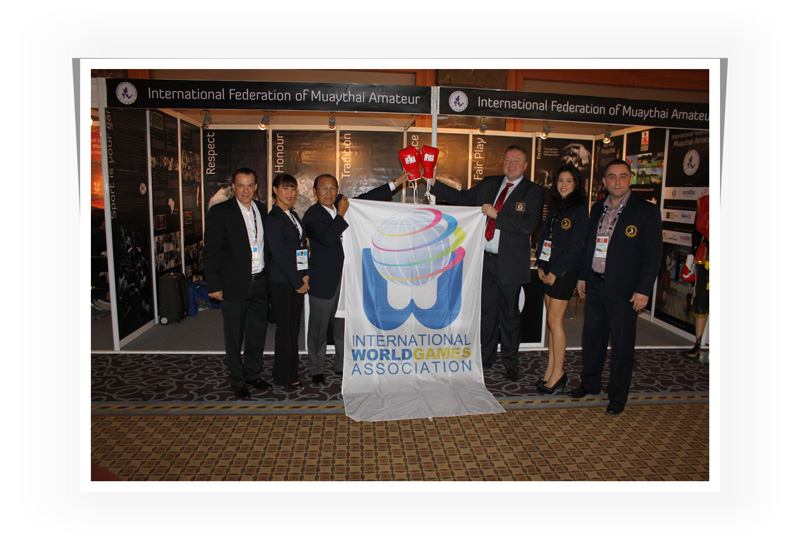 BELEK (10/04/2014). Last year, the International Muaythai Federation Amateur (IFMA) was admitted as a new member of The World Games family. This year, during the SportAccord Convention in Belek/Turkey, Tom Dielen, member of the International World Games Association (IWGA) Executive Board, took the opportunity to present the official IWGA Flag to IFMA President Dr. Skachye Tapsuwan. The flag will be raised at the top events of the Muaythai Federation such as the World Championships 2014 in Malaysia from the 1st-10th May.

President of the International Federation of Muaythai Amateur Dr. Skachye Tapsuwan, highlighted two aspects after the short ceremony on Thursday: "I think we can contribute to increasing the significance of The World Games. Membership of the IWGA supports us in making our sport better known worldwide." For this reason IFMA described their inclusion in the Official Sports Programme of the World Games in Wroclaw, Poland,  in 2017 as an “historic chapter”.

IFMA President, Dr. Sakchye Tapsuwan thanked the IWGA Executive Board for its faith in Muaythai and expressed his deep gratitude. Dr. Tapsuwan stated “This is a proud moment for our sport. The World Games has become one of the major sporting events in the world and for IFMA as a new member of IWGA to be included, is truly an honor”.

IFMA Sports Director, Charissa Tynan added: “The last World Games in Cali had over 500,000 spectators and Muaythai already had a roadmap in place for 2017 with qualification events on all five continents.