Congratulations to Marcin Dzieński, bronze medal winner at the IFSC World Cup in Wujiang (CHN). The sports climber from Poland won the small final and secured first place in the IFSC 2016 Speed rankings. It is the first Overall win for the twenty-three-year old after winning the World Cups in Villars (SUI), Arco (ITA) and Chamonix (FRA).  Becoming the Overall champion crowned a very successful season. 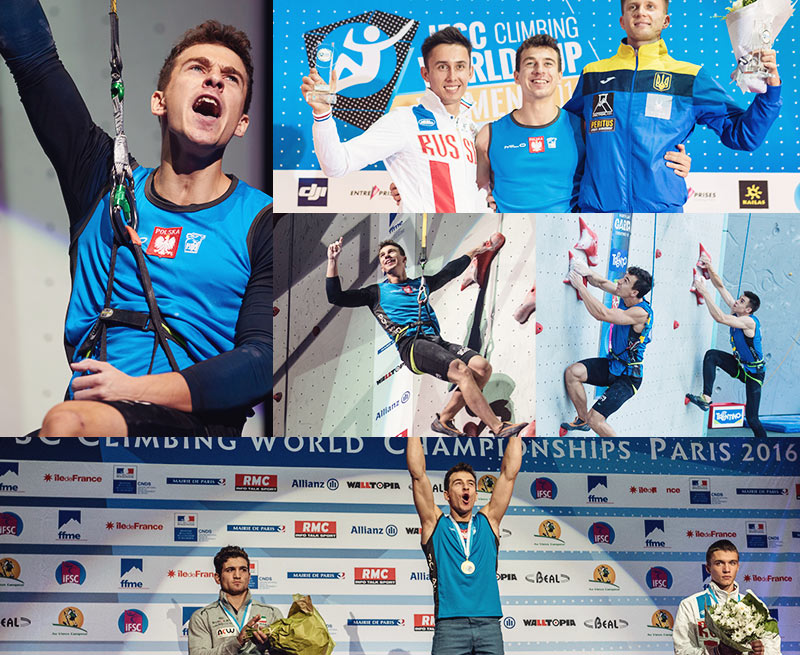 Marcin Dzieński, who lives in Tarnów, a city in southeastern Poland, was the first ever Polish World Champion in Sport Climbing. He won gold at the IFSC World Championship in Paris this September, by beating the famous “Persian leopard” Reza Alipourshenazandifar from the Islamic Republic of Iran. It took Marcin Dzieński 5.83 Seconds to push the button and win the title. After the final run, the Olympic Channel posted a video asking: “Did we just see the Usain Bolt of sports climbing?” At the World University Championships in Shanghai in October he won silver individually and bronze with the Polish team.

The athlete is now aiming for more, claiming that he may be able to set a new world record. A great opportunity to do so will be The World Games in Wroclaw/Poland. Marcin Dzieński has qualified for the competition in his home country. On Facebook he stated: "I got it all, but now it is time for something even bigger – The World Games 2017.” He can definitely expect huge support from Polish fans. His recent success brought a lot of media attention to the climber himself and the sport. Sport Climbing is one of 27 sports on the program of The World Games 2017 in Wroclaw/Poland (20-30 July).

1 November, 2016 in Athlete of the Month
More news