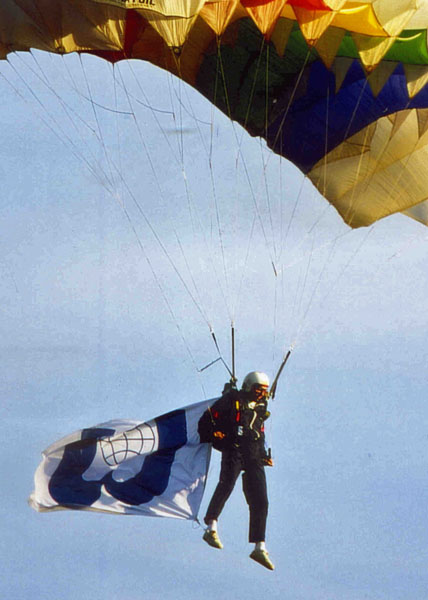 From the deep south to the far north, from Port Elizabeth in South Africa to Lahti, Finland. The fifth edition of the World Games was held from 7th to 17th August 1997 in this Finnish city, best known for its Nordic Skiing events. Port Elizabeth had withdrawn from its commitment to host the Games just three years before the start of the event.

The official programme of the Lahti Games included 20 sports. A total of 164 medal events attracted 93,000 spectators during the ten competition days. 1,566 athletes from 70 nations strived for the gold of The World Games.

Port Elizabeth was the original choice to host the event in 1997. The Mayor of Port Elizabeth duly received the World Games flag at the closing ceremony of TWG 1993 in The Hague, Netherlands. But in August 1994, Port Elizabeth decided to pull out of the Games due to the political situation in the country. Lahti in Finland stepped in at short notice and signed the host contract in January 1995.

The city had a worldwide reputation as a winter sports hotspot. Now the organisers, under the leadership of Mayor Kari Salmi, President of the Organising Committee, showed that they could also be excellent hosts of a summer sports event. A reference to winter was unmistakable: some competitions took place literally in the shadow of the big ski-jumping hills. The participants of The World Games 1997 recall the event as a very compact Games, with sports venues closely clustered in the city centre. Only twelve venues were needed to host all the competitions. These included the Lahti City Theatre (Bodybuilding) and the Jokimaa Horse Racing Centre (Parachuting).

The Opening Ceremony took place on 7th August at the Lahti Sport Centre. The official opening was performed by IOC President Juan-Antonio Samaranch. Finnish Minister of Culture Claes Andersson also attended. IWGA President Ron Froehlich, newly elected in 1994, spoke for the IWGA at the opening of the Games.

The medals table was headed by the USA (17 gold medals/18 silver/11 bronze) ahead of China (16/14/5) and Germany (15/16/10).  The Americans dominated especially the roller sports disciplines. The USA won 11 of their 17 gold medals in this sport alone. Russia presented itself particularly strongly in the Gymnastics disciplines and won 10 gold medals.

AirSports (Parachuting), DanceSport, Aerobics and JuJitsu made their debut in Lahti and have been a permanent fixture in the TWG programme ever since. Squash was also included in the competition calendar for the first time. Women's Weightlifting was for the first and only time part of the event; this discipline has been Olympic since 2000. The individual Trampoline disciplines were also included in the Olympic programme after the Lahti Games. It should also be noted that Trampoline and Sport Acrobatics were counted as separate sports for the last time; the two federations merged later with the Fédération Internationale de Gymnastique. The disciplines are now listed under Gymnastics.

Due to the compactness of the event, participants were able to meet with other competitors in the city, which gave them a real feeling of being part of a multi-sport event. Lahti Happenings, under the Presidency of Reijo Mäki-Korvelo, arranged for the production by the Finnish broadcasting company YLE.  It aired more than 30 hours of TWG (15 hours live). The international distribution of the television programmes was done by Trans World International TWI, a company under the roof of IMG. The cooperation resulted in an excellent television production and widespread distribution of the daily summaries of the World Games competitions.

In the minds of organisers as well as participants, the World Games 1997 in Lahti will always remain a successful event. In the years following this outstanding event, the IWGA and the IOC agreed on a Memorandum of Understanding. It was signed in the year 2000 and strengthened the close cooperation between the two entities.

Lahti is a city in the south of Finland, 100 kilometres north-east of the capital Helsinki. The township originates from 1415 and was located on the medieval trade route to Vyborg on the Gulf of Finland. The completion of the railway line from Finland to St. Petersburg in 1870 turned Lahti into a lively station with industrial installations. In 1904 Lahti, by ordinance of Tsar Nicholas II, became a city. Since then, the city grew until 1975 when it reached its current size. 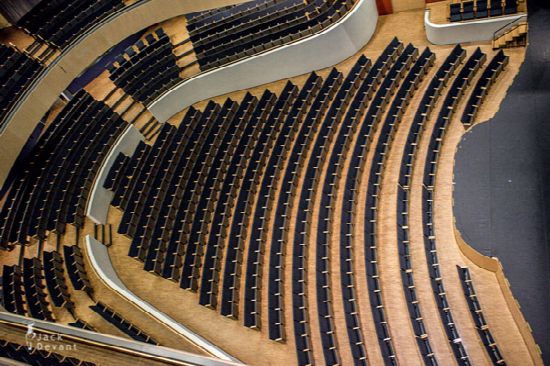 Lahti harbours cultural ambitions, with a large congress and concert centre - the Sibelius Hall. Lahti has one of Finland's most widely known symphony orchestras, the Lahti Symphony Orchestra, which performs both classical and popular music, notably concentrating on music by Jean Sibelius. Lahti's greatest educational asset is the highly valued Institute of Design, which is a part of Lahti University of Applied Sciences. The institute has gained international recognition in particular for jewellery and industrial design. Other areas of expertise include metal, woodworking and furniture. 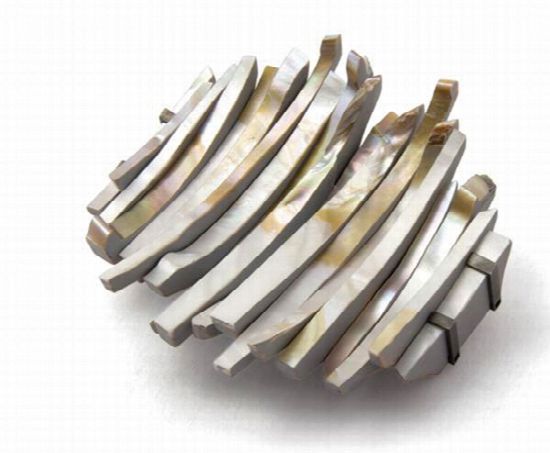 Lahti is best known for its annually held World Cup winter games, the Lahti Ski Games. Ski jumping events of the Lahti Ski Games are part of the Nordic Tournament. As of 2010, it was the only city to have hosted the FIS Nordic World Ski Championships six times, in 1926, 1938, 1958, 1978, 1989, and 2001. The Sports Institute of Finland, which is based in Vierumäki near Lahti, is the most versatile centre of sports education in the country. Apart from the World Games in 1997, Lahti hosted the 18th World Masters Athletics Championships in 2009.

The organizing committee started its activities for the event with the design of the event logo. The Lahti logo has no clear connection to any symbols of the City or The World Games. The form, however, is as stylish as the Finnish Lapponia Jewellery. The orange oval with the three gridlines might refer to the globe of the World Games.

The Lahti poster uses the event logo as the focal point of the poster. At the bottom of the poster is the skyline of the City of Lahti with the characteristic high features such as the radio-towers, the town hall and the ski-jump. The fresh green leaves of the trees in the countless forests around Lahti at the bottom completed the elegant poster. 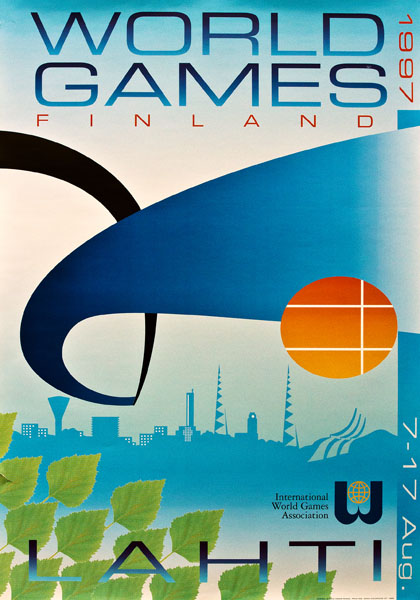 The graphic designer Osmo Penna was requested to create the mascot for the Lahti event. He felt that a fox with its playful spirits would be a good choice. The fox was athletic enough to perform all the World Games sports, which was a good thing, as the mascot was also used as the pictogram for the participating sports.  To give the fox a Finnish look, the designer gave the mascot the four-cornered hat from Lapland. A local teacher invented the name August for the mascot. The name not only resembles the month in which the event was held, but August is also the name of a clown, the funny man in the theatre and circus.

The program book depicts the Northern lights, a phenomenon which can also be seen in northern Finland. The event logo and the title are almost hidden in the dark sections of the cover, but the mascot August is not missing on the cover of the program. 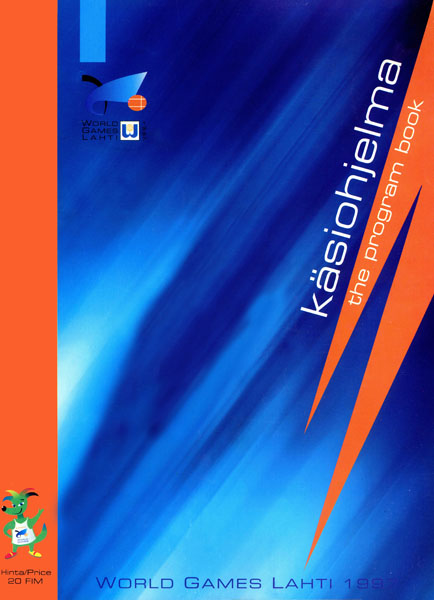 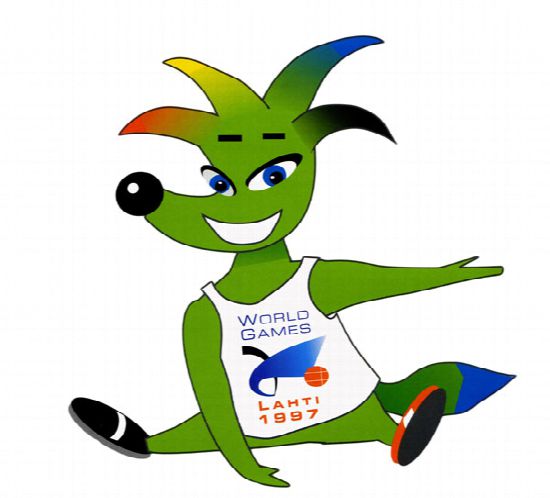