Team of the Month September 2014

Congratulations to the German Canoe Polo Women’s Team, IWGA Team of the month for September 2014.

Germany won the Gold at the ICF Canoe Polo World Championships in Thury-Harcourt (France). The athletes from Germany seized the title on Sunday with a convincing 5-1 win over their opponents from Great Britain. The International Canoe Federation reported: ”Germany confirmed their total domination in the women’s category.”

This is a repeat performance for the defending champions after having won the same title in 2012.  The win on Sunday is Germany’s fourth Gold medal performance at the World Championships, which puts them in a tie with Great Britain with four championships each.  They are also the current World Games Champions, after defeating Great Britain by a margin of 2-1 in Cali, Colombia in 2013. Coaches Lars Wolf and Jan Menzel lead the team. 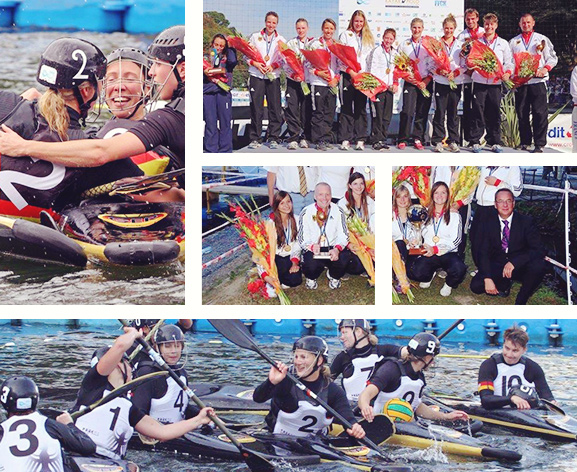 German captain Elena Gilles was quoted as saying: “It feels so great. Today was a fun game for us. We played very free here. All of us are playing at the same level. So everyone can play in the same way.  These World Championships were fantastic.  The atmosphere was like nowhere else.” Lars Wolf said after celebrating the gold medal with his team: ‘We are very proud. The win is a testament to our great team spirit. This was crucial to defending the title.“