Athlete of the Month June 2014

Congratulations to Paola Longoria, IWGA Athlete of the Month for June 2014. The World Champion racquetball player from Mexico won gold medals in both singles and doubles (with partner Samantha Salas) at the 2014 IRF World Championships in Burlington, Ontario. 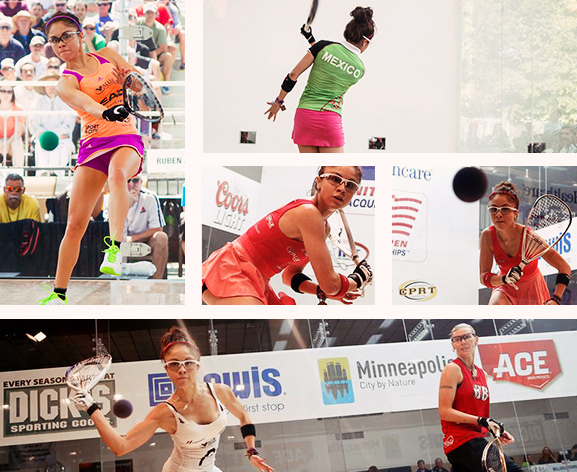 Paola will celebrate her 25th birthday in July. Her achievements to date chronicle an incredible 17-year journey punctuated with sports and life successes. Born in San Luis Potosí, Mexico, Paola now lives in Monterrey and represents Tijuana. Her winning motto has guided her impressive record: Have Fun, Play Hard and Smart! Believe in You!

Paola began playing racquetball at summer camp when she was eight years old. She discovered then that she had an interest in racquet sports and chose racquetball: “It’s my passion and my lifestyle! At first I didn’t have sponsors, so my parents supported all of my expenses to help me increase my ranking on the professional tour. I changed my city of residence to represent another state, and I really appreciate their support.”

Placing great value on education, Paola has earned a degree in Engineer Mechanic and Administration from the Universidad Autónoma de Nuevo Leon and is now pursuing a Masters degree in Political Sciences. “It’s hard to mix school with sport, but I have incredible support from my university, and I love the way I can handle this with my professors.”

Asked about memorable racquetball moments, Paola replied, “One of my favorite moments is when I won my first US Open. I was 18 years old and became the first Mexican and the youngest player to win this event. Another of my favorites was winning the 2012 IRF World Championship in the Dominican Republic. It was the only title that I didn’t have in singles. Also, I had the opportunity to receive the most prestigious award that an athlete can receive from my country, and that means a lot to me.”

Paola speaks about her support system. “I love my family! My parents are my heroes. I have two brothers (ages 26 and 16), they love my sport and they support me in everything. Also, I have two dogs, a Yorkie and a Chihuahua.”